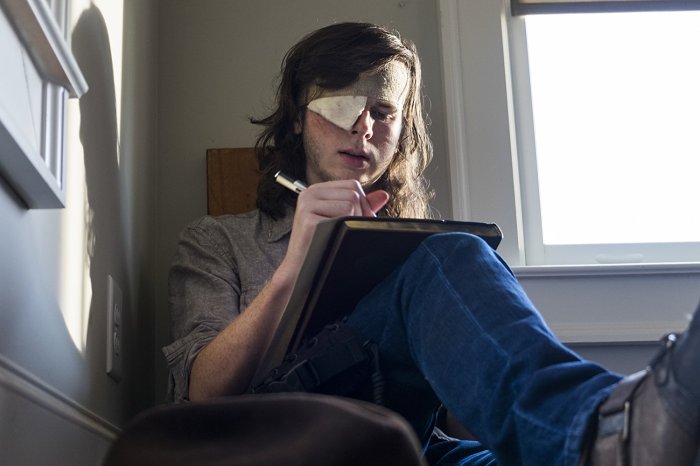 Even though we knew this was coming for over two months this was still a difficult episode to get through. Everyone, including myself, had their legitimate gripes about Carl over the years but once he hit a certain point in his development sometime around the latter half of season two he was a consistently good character. He was whatever the writers needed him to be. He was the badass survivor, the beacon of light in the dark days, and the comic relief. He was the catalyst for everything Rick would become and what he did to keep his children and people alive. It’s fitting that Carl’s last message to Rick is one of hope. As Rick said tonight, everything from the very beginning was for Carl and it’s important that that message doesn’t die with the son. This was a fitting sendoff for the character.

B Plot: Morgan’s Descent into Madness

It’s hard to believe that up until last season Morgan was a character who firmly believed that all life is precious and everyone deserves a chance to change. Now he’s a guy who runs around killing everyone without a second thought. Some may look at this as lazy writing but I like it. This series has had its share of moral compass characters over the years but they almost always die before we see what this world really does to them. Morgan is a man who’s losing his battle with the darkness that has enveloped this world and that’s an interesting thing to watch. It’s sad to see what this man has become but I think this world eventually takes all good people. Morgan is no different.

We finally got a resolution to those Old Man Rick sequences and it turns out they were Carl’s dreams for what the world could be. Naturally, this is a world of peace, cooperation, and forgiveness. All the usual people were there but so was Eugene and, shockingly, Negan. I don’t think these scenes are predicting the future but rather showing us that in the end, Carl thinks every single person is worth saving. This stands in stark contrast to the Morgan scenes; as Morgan descends into madness Carl ends up as far away from the dark path he started down at the prison in season three as possible. This is the message that I loved seeing Carl go out with.