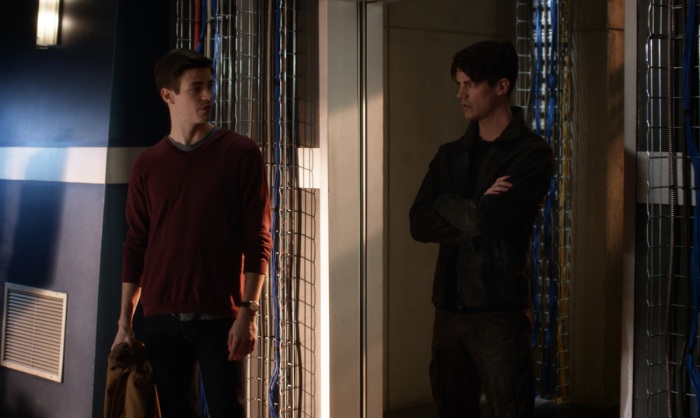 WARNING: There are spoilers ahead for the season 3 finale of The Flash.

As many of us expected, HR and Iris managed to switch places before the dramatic showdown on Infantino Street. I’m glad the writers didn’t waste any time drawing this reveal out. Many of us saw it coming last week so getting it out of the way in the opening scene kept the episode flowing nicely.

Something I really liked in this episode, something that I think goes a long way to defining who Barry Allen and the Flash is, was Barry trying to save Savitar. Just two episodes ago in “Cause and Effect,” we saw Barry lose his memories but still manage to be a hero. It showed us who he is deep down inside and that continued tonight in his efforts to save Savitar. Although it was a fruitless endeavor on his part, it reminded us yet again who Barry is. Even though everything that happened this season was Barry’s fault and he paid the ultimate price for that, he’s still the good guy of this story. One thing you can bet money on is that Barry will always do the right thing in the end, even if it’s the hard thing. Given how this episode ended, I think it was important to show everyone one more time that Barry is righteous. In the end, there was no saving Savitar, and even though time was going to take the so-called speed god anyway, Barry didn’t lose sight of who he is by killing him. As he told Savitar right before his demise, Barry will never go down that dark path.

This was not the ending I was expecting for Killer Frost but it seemed appropriate. I think there are going to be so many questions surrounding the fate of Barry that the fate of Caitlin will get lost. That’s unfortunate because her story is far from over. While she declined to take the metahuman cure that Julian concocted, it appears that Killer Frost is no more. I’ll be wondering all summer what this means for the character. She appears to be in control of her powers now but by her own admission, she’s now longer Caitlin. Does this mean that Killer Frost will return next season with her powers but no longer a villain? That would be a good story turn for me. As long as Danielle Panabaker returns then I’m happy.

I don’t think anyone saw this ending coming. Even if you’re a fan of the comics where Wally West took over the mantle of the Flash for 20 years, you couldn’t have predicted this for the show. While we may be getting ahead of ourselves with the fates of characters here, it certainly seems like Barry will at least be taking a brief hiatus from Central City. While I don’t want this to be permanent because I love Grant Gustin’s take on the character, the Flash in the comics has never been just Barry Allen. I want him back but I’m also exceedingly curious to see if the show has the guts to change main characters four seasons into its run. I’m going to bet no on that, but it’s possible. Again, this is how the story of the Flash goes in the comics so anything is possible. It’s just too bad we have to wait to find the answer. I will be patiently waiting until the season four trailer drops in July at San Diego Comic-Con.