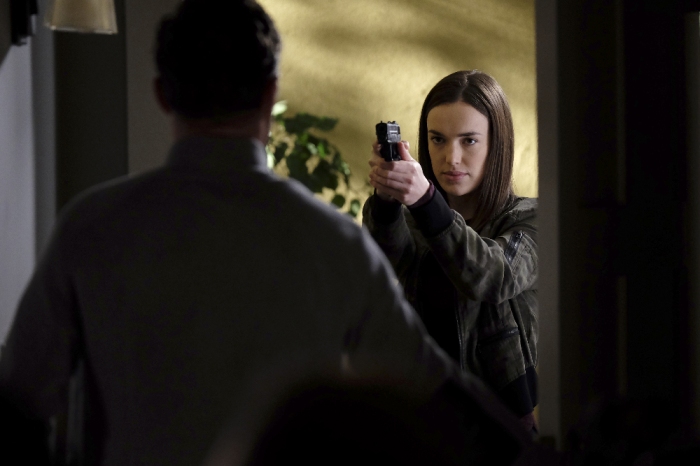 WARNING: There are spoilers ahead for the latest episode or Marvel’s Agents of SHIELD.

A Plot: Out Through the Backdoor

Most of this episode was focused on the team getting to the backdoor that Radcliffe built into the Framework and leaving. Things moved a bit faster in this episode with May and eventually Mack finding out the truth about the reality they’ve been living in. Explaining things to them seemed rushed to me, but there’s only so much story development that can happen in a series. It took a willful suspension of disbelief to watch May accept the Framework explanation, but this is a Marvel show so willful suspension of disbelief is kind of a requirement. I did like how they handled Mack finding out though. Unlike Coulson and May, Mack is the only one of the team that ended up with a happy life in the Framework. If he was told about his virtual existence earlier, he never would have left the base where Hope was staying. This little act of subterfuge by Daisy and Simmons was a necessary evil to get him to go along with the plan.

As for Mack, I’m not entirely sure this is his end. There are still two episodes left in the season and the next one is titled “The Return,” so I’m sure we’ll be going back into the framework. Even if Mack doesn’t return to the real world, the rest of the team will get to say their goodbyes to him. The noticeable absence of Ward in this episode was also a clue to me that we’re not done in the Framework yet, but from here on out the team, including Fitz, will all be aware of the fake existence they’re living in and will able to better combat Aida and Hydra.

B Plot: Aida’s No Longer Aida

Despite the best efforts of the team, Aida was able to fulfill her efforts to get a real live body. I could spend the next week thinking about the logic of her being able to suddenly transport herself and Fitz back to the Framework, but I’m going to just put it out of my mind and let the writers explain that one to me. Again, it’s Marvel and the whole willful suspension of disbelief thing. I’m not even expecting a real explanation. I just know that whatever happens next, Aida/Ophelia is still a formidable threat, maybe even more so now that she seems to have this newfound ability to become one with the Framework.

I’m glad we got to see what was going on with Yo-Yo and the rest of the team on the Quinjet. I’d mostly forgotten about them, but seeing them again after all this time was welcome. Now that the team is rescued, I’m curious if everyone else will be going back into the Framework? Coulson and company will need all the help they can get fighting Madame Hydra and her goons.

There’s still plenty to explore with Fitz and his dad. As far as I know, Alistair Fitz is still alive in the real world. As I’ve written before, if he’s half as bad as he is in the Framework, he has some serious villain potential for a future season. Hopefully, his story and history with Fitz didn’t end here.

As you may have noticed, I didn’t write a post for last week’s episode. It was a good episode and I hope to give my thoughts on it, but I’m currently in the middle of moving and didn’t get a chance to sit down and write about it.