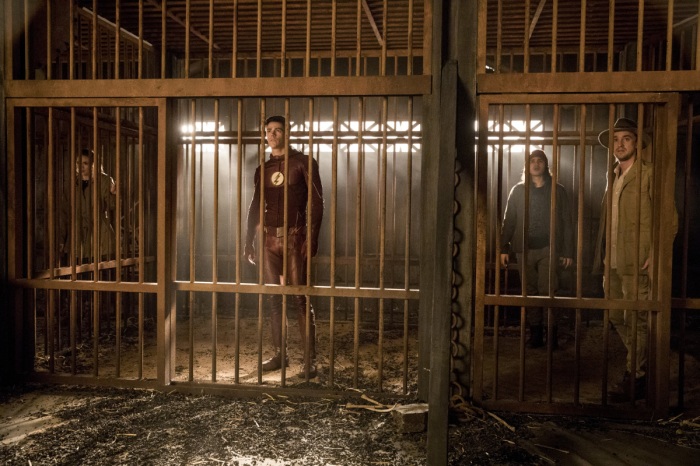 WARNING: There are spoilers ahead for the latest episode of The Flash.

A Plot: Team Flash and the Gorillas

This was one of the most grandiose episodes of The Flash to date. From the gorillas to the arena combat, this episode delivered on the promise to be an epic event. As the first part of a two-week event, this episode worked perfectly as the setup for the gorilla war against Central City that will come next week.

As for the actual story, it’s great to see Grodd back and terrorizing Team Flash. In a way, Grodd is the only remaining legacy of Eobard Thawn’s time on Earth-1 (his first time on Earth-1, not the brief time that came in season 2 of The Flash or his current time on Legends of Tomorrow). When he was jettisoned to Gorilla City, we knew we hadn’t seen the last of Grodd, but I wasn’t expecting something like this. Using Harrison Wells to lure Cisco and Flash to Earth-2 to defeat Solovar, just to attack Central City, was great. Week after week Flash faces off against metahumans that can be defeated once the team figures out the science behind their powers; Grodd is simply a foe with brute strength that would be a major threat to Flash even without the telepathic powers. And next week we get to see that brute strength on display, and that excites me.

B Plot: Kid Flash and Quick

The secondary story this week was kind of boring. Maybe the writers didn’t want it to distract from the main story going on in Gorilla City? If so, it should have taken up less screen time. I thought maybe we would see Wally and Jesse training together or fighting a metahuman or two and saving the city while Flash was away, but instead, the story mainly focused on the budding romance between the two. There’s nothing wrong with telling the love story, but it was done in a way that felt like filler for this episode. That’s a rare misstep for the writers.

C Plot: Not Killer Frost Yet

This week’s C plot was brief, but Julian is determined to save Caitlin from permanently becoming Killer Frost. I’m excited to see where this goes since the future tells us that Killer Frost will return. That leaves us guessing whether or not we’ll get another episode with Caitlin as the villain or if Julian will be successful in his attempts to save her. It has to be one of the two because the writers can’t do something as boring as simply having Caitlin never use her powers again. My guess is Julian will figure out a way for her to use the Killer Frost powers without going all crazy.