Skip to content
HomeArrow Thoughts: S5 EP09 “What we leave behind”

Christmas in the Cave
In the Arrow cave we find Diggle and his son John playing happily while Rene and Rory sit down at a table. (It’s hinted that Rene may have a child, but no details emerge). We then have a nice scene where Evelyn gives each of the team a present, which are decorated Christmas stockings with their superhero names on them. Is this truly a kind gesture to the team, or a ploy to hide her betrayal?

No one throws a party like a Queen
Thea put together the Mayor’s office holiday party, and in spectacular style to boot. We get to experience a small touching moment where Thea tells Oliver that she now see’s what happened in the crossover event that spending some time, albeit false, with her parents again was a gift.

So Die Hard actually is my favorite Christmas movie. Every once and a while the @ARROWwriters throw me a bone. I’m easy to please.

After a lovely speech where Olivier tells us his two favorite Christmas movies (Die Hard and It’s a Wonderful Life), the party has it’s fare share problems. There is squabbling between Curtis and Paul, as well as awkwardness after a failed “double date” joke by Felicity when she and her boyfriend see Oliver with Susan. Then finally, on the steps of the mayor’s office Prometheus comes after Curtis leaving him a hot mess, threatening Paul as well. This incident makes the team realize that Prometheus knows their identities — and sends them all into a state of nervousness.

This leads to a rough spot for Felicity and Billy, who insists he will not only protect her, but also continue his own investigation. She insists that he doesn’t, warning that he could end up dead like the other cops. He leaves her in a huff, saying that he needed to stay true to himself and be a detective.

Traitor!
Evelyn Sharp gave up the team’s identities to Prometheus, along with their home addresses. We still don’t know if she truly did go “dark side” or if she thinks she can actually act as a double agent — but she certainly did seem determined to put an arrow into Oliver. She demands to be there when he takes down Oliver, but the villain tells her chillingly: “I’m not going to kill him, I’m going to make him wish he was dead.”

At the Pharmaceutical company Oliver, Wild Dog, and Diggle learn not only of Artemis’s betrayal, but have a clue as to the identity of Prometheus. Jason Claybourne was mentioned as one of the names on “the list” in the show’s pilot episode. The flashbacks went back to this care where John warns liver that his body count could lead to unexpected consequences, and sure enough he was right.

Prometheus’s Identity Revealed?
The Ashes found at the site are those of Jason Claybourne’s throwing a wrench in their idea about who Prometheus is. However after some detective work, Detective Billy Malone locates a baby picture and sends it to felicity, getting the team a substantial lead. Prometheus is a blood relative of Claybourne, likely his illegitimate child who would be about thirty years old. What this man looks like now we do not know, but it appears the hood’s past has come back to haunt Oliver.

Billy Malone ended up kidnapped by Prometheus for sticking his nose where he shouldn’t be. Oliver insists they will find him, and after having a flashback he remembers the location he killed Claybourne. He heads to the site alone, re-living his rampage through the building. Prometheus placed dead bodies exactly where they were found, showing that he studied every detail.

Once Oliver makes it to the top we see a familiar pool with a floating body in it. After a very intense fight sequence Prometheus and Oliver fall over the side of the building, but land back inside a few floors down. After mocking Oliver, telling him everything he touches dies that too comes to fruition. It turns out the Prometheus he shot with multiple arrows was actually detective Malone dressed in his costume. 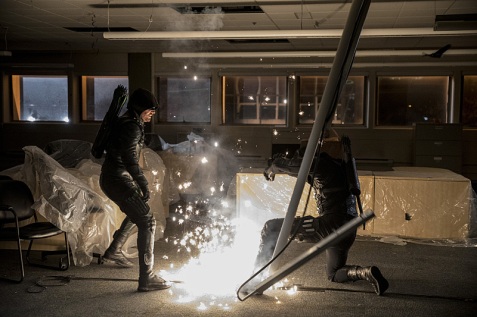 A Team Arrow Collapse?
Prometheus’s plan to destroy Oliver’s beloved team has come into play. When Oliver returns to the cave he tells them all what happened, and that he killed billy. He also tells them all to leave and go hide elsewhere, far away from him. The team however refuses, insisting that they stick together. Even Felicity blames Prometheus for what happened, not Oliver. However this show of strength ends in heartbreak.

Afterwards we learn Paul is leaving Curtis to go live with his brother, hinting at an impending divorce because of Curtis’s vigilante behavior. Felicity is absolutely crushed over the death of her boyfriend, who she will now never know if it could have blossomed into ‘love’. It appears Diggle has been found by the army when he gets a desperate call from Lyla and is greeted at the safe house by laser sights and semi-automatic weapons.

Then there is Oliver, who in a moment of desperation turns to the sleazy reporter Susan Williams who offers him a drink. She offers him a drink, which happens to be a very familiar brand of vodka before starting a make-out session. Who really is Susan? Does she have Russian ties, working with Prometheus, or perhaps ties with the teased character Talia Al Ghul? I suppose we will have to wait till the spring season to find out.

The Bombshell:
After Oliver leaves Susan’s, he returns to the Arrow cave where he is greeted by none other than a smiling Laurel Lance. Could she really be alive? Is this the return of Black Siren? Or perhaps it’s all a drug-induced hallucination? Either way it was quite the revelation at the end and leaves everyone wondering what will happen to our team.

As always, thanks for reading and please feel free to leave your comments and theories below!