“Penance” Brief Review
I apologize, I was sick so I didn’t get a chance to review episode #04 in a timely manner, but it primarily revolved around Oliver breaking into jail to rescue Diggle, Felicity and Rory repairing their working relationship, and Felicity managing the junior team arrow when things heat up in the city. While Diggle at the end has  returned to his normal self and rejoined the team, Oliver learned that Rene was captured by Tobias Church after he sacrificed himself so that the others could escape.

I wanted to note one thing important about our new DA.  In the DC Universe there in an Adrian Chase who is a district attorney and also known as the “Vigilante.” The episode teased him saying that the city is now policed by those in masks, teasing that he may also be looking to don a mask in the future. However it should be noted that while his role is limited, It’s also a character that has ties to Deathstroke.

Now onto Episode 5 – The Human Target
The premise of this episode revolves around Tobias Church. Team Arrow has been desperately trying to find Rene, who is being tortured by the mobster. He lets slip that Oliver is the Green Arrow, but caught what part of what Church’s master plan was while being forced to dig his own grave. The Green Arrow arrives to save Rene, however the damage is already done. Diggle tells Oliver not to worry however, and says that he knows someone who can help fix this — The Human Target 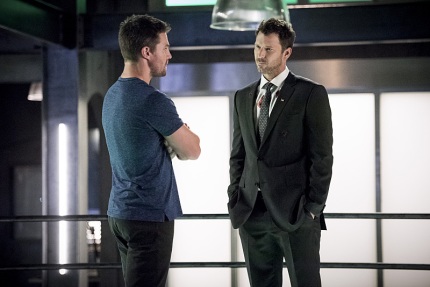 In one day it appears that Oliver was able to not only able to get the troublesome reporter Susan Williams to lay off the attacks (and she gave him her number), but he also got a councilman to flip on his vote for the affordable housing through a little political research (aka blackmail). However on his way out of the building, Oliver’s security team is attacked and then he is then brutally shot by a man hired by Tobias Church.

Deputy Mayor Lance announces the Mayor’s death on TV, however  Oliver is alive and well in the arrow cave thanks to some amazing work by Diggle’s friend Christopher Chance, nicknamed the “human target”.  He pulls off his mask revealing that he doubled as Oliver for the entire day. Christopher doesn’t just look like the people who are targeted, he becomes them. He tells Oliver that he has a good gig as the mayor, and fills him in on the days events.

Olicity
After Christopher Chance tells Oliver about Felicity’s new policeman boyfriend Billy Malone joining the ACU, he shows up on Felicity’s balcony to have a small chat. He states that he isn’t upset that she’s seeing someone, but he’s hurt that she didn’t tell him. She admits that she was wrong for not telling him, and he even makes a comment asking if she was still keeping the door open for himself. Felicity clarifies (albeit nervously) that she wasn’t keeping ‘them’ on the table, but rather she wasn’t sure if what she had with her new boyfriend was real or not.

Rene and Diggle
Rene and Diggle spend some time together at the old HIVE base. After some time and prodding, he finally gets Renee to open up about his own dishonorable discharge. They both share some bonding moments, wanting to find penance for their past mistakes. It seems that Diggle is becoming a great mentor for Rene, and even helps him to remember a few remarks about Church’s plan.

The End of Church
The entire team works together to take down all the major crime bosses the Church is over, and Oliver takes down this nemesis in an epic action scene that was quite magnificent to watch. Church offers Oliver a warning, saying that there is something much worse coming, and that Prometheus is going to end the Green Arrow. Church’s prison transport was attacked, and once he revealed who the Green Arrow was Prometheus killed Church before disappearing into the night.

Closing Remarks
Oliver apologized to the city for faking his death, saying that this was the ACU’s chance to not only take down Tobias Church, but also other crime bosses from nearby cities. While that chapter has ended, another one opens with our sneaky reporter Susan Williams buying information, including a picture of Oliver Queen from when he was missing several years ago at a town in Russia. Is this woman looking to make a big story, or does she have something else in mind?

As always, thanks for reading and please feel free to leave your comments below!