The episode this week as expected was a full on sprint. There was a lot of information squeezed in, so I’ll try to break it down as best I can.

Not-so-Pleasentville
In a not-so-surprising move, Malcolm decides to drug Thea with the lovely yellow pills to make her comply. Unaware of this, Oliver and Diggle search through the underground town for her facing Dahrk and Malcolm along the way. Thea attacks Oliver, but again in a not-so-surprising move he helps her return to normal by just having a short chat.

As much as Thea really wants to kick her father’s ass they are faced with the reality that Anarky is causing trouble. He took Ruve and her daughter hostage to get payback against Dahrk. Malcolm completes an evacuation of the residents while the team goes after Anarky. After a short fight they are able to rescue Dahrk’s daughter just in the nick of time, but Ruve ends up dead. 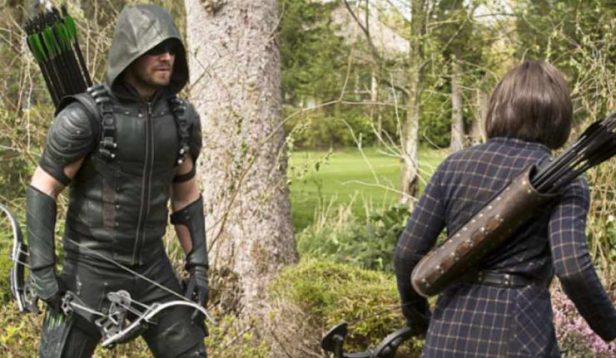 The Hacker Trifecta
Back on the surface Curtis, Felicity, and Noah are all working to save the world. Well, when Donna and Noah aren’t fighting with each other (guess we know now why they never got along). It won’t be an easy task to permanently disable Rubicon however, because Dahrk employees another familiar hacking villain Cooper, felicity’s ex. Eventually they are able to outsmart him, and unfortunatly he still is alive at the end of the episode.

Felicity tells her mother that she works with the Green Arrow, and yes she is indeed trying to save the world. Her mother seems a bit hurt that she didn’t know, but that was glossed over by another teased revelation. The “family secret” was that Donna left Noah, not the other way around.  Felicity seems to be a bit bothered by it since she believed it was her father who left them, but she understands her mothers choice. In my opinion this really wasn’t a “shocking secret” that was hyped up.

We do see a scene at the end between Donna and Noah where she tells him to leave and never come back. She insists it’s what is best for Felicity, and that they both know that Noah will never change. In a way this plays into the relationship woes between Felicity and Oliver.

The Flashbacks
The flashbacks were a bust and ate up precious time in the episode, we learned nothing new other than the idol can possess a person when they hold it, and that it can bring out the darkness inside anyone. It looks like in the last episode we will see a showdown between Taiana and Reider.

The Beginning of the End
Dahrk talks to Merlyn and he wants to blow up the world even though there is nowhere safe to stay, leveling up his supervillain status.

After Donna tells Felicity that her father left we are ever so kindly interrupted by none other than Damien Dahrk. He appears angry over Ruve’s death, and the unknown circumstances of his daughter. It seems he has a new focus and that is on the group in front of him.

With one episode left we are teased with seeing  a possible ‘Mayor Oliver Queen’ helping to control the streets. With shades of yet another battle taking place within the city limits we can only hope that it’s not too similar to last years finale. My verdict on this season is still incomplete, so we’ll have to see what happens in the finale before I can properly reflect.  As always, thanks for reading and please feel free to leave your comments below.