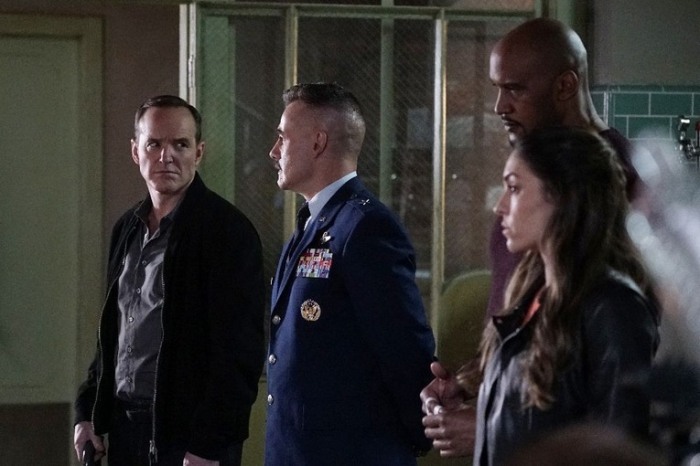 WARNING: There are spoilers ahead for the latest episode of Marvel’s Agents of SHIELD.

As it turns out, Captain America: Civil War was just too important for the show to ignore or gloss over. I wondered last week if some of the story lines from the Civil War comic would make their way into Agents of SHIELD, and this episode gave some clues supporting that. Captain America: Civil War focused mostly on the Sokovia Accords and the Avengers signing on to them. It didn’t really get into the subject of registering other superheroes, and other than Spider-Man and Black Panther, no new characters were introduced. That’s where the show comes in. The comic had a fairly simple plot, but the storylines were interwoven in a intricate way. The main event was seven issues, but the number of tie-in comics was over 90. Marvel Studios would have to devote multiple phases of their films to tell the story accurately (and I’m not suggesting they do that). As a result, there are plenty of plots being left on the table when it comes to telling this story. One of those plots is the controversey over registration. One thing the show has that the films do not is secret identities. As General Talbot said last night, he knows about Daisy, Lincoln, and now Yo-Yo Rodriguez, but no one else. We as an audience don’t even know about that many of the Inhumans. Agents of SHIELD can build a whole season around the Superhuman Registration Act, or an Inhuman Registration Act, and the fallout that comes from some powered people refusing to comply.

Lincoln has been fiercely loyal to Daisy this season, almost to the point of annoyance. He was so open about the fact that he was only with SHIELD for Daisy that I often wondered if he was around solely to be cannon fodder later on. I now think it was all building up to the plot twist in this episode, and I have to say it paid off. The Daisy and Lincoln connection had been so built up over time that it never occured to me that his “escape” could all be a ruse. This gives me some hope for Lincoln in the future, but it also sets him up for an even more shocking death next week (but don’t put too much stock into that since almost everyone has been setup for a shocking death next week).

Does anyone else think Lash had a disapponting end? He was set up as such a formidable opponent this season and then he just kind of disappeared. He came back sporadically, like the time he showed up just so we could see Andrew permanantly transform, and then subsequently disappeared again. I actually forgot he was still around before he appeared again in this episode. He came back for another payoff to a subplot that had been slowly built up over this season, specifically Lincoln’s repeated story about the Inhumans being given their power based on the needs of the community. I had wondered if Lash hadn’t been given his powers as a way to right the wrong of the Terrigen mist accidentally creating all these new Inhumans, but apparently he was created to defeat Hive. That’s cool, especially when Lash actually snuck onto the plane to mount his sneak attack. But then Lash didn’t defeat Hive, and then he died. I’m not saying it was a terrible decision by the writers, but this would have been a better twist for the season finale, and it would have been exceedingly more interesting if Lash had actually defeated Hive before dying. For a show that keeps us on our toes, I thought this was a rare misstep.