Warning: There are spoilers ahead for Star Wars: The Force Awakens. I am giving my thoughts on every aspect of this film. Please don’t read this if you don’t want the experience ruined for you.

For the first time in my life, I was nervous as I sat down and waited for a film to start. Star Wars has been such an important part of my life from the time I was five-years old until now. The original trilogy moved me in ways no other film has. I can’t begin to tell you how many hours I spent pretending to be Luke Skywalker swinging a lightsaber around my parents’ living room as I battled stormtroopers and Darth Vader. Now, I’m not one of those people that think a bad movie ruins my childhood, but I wanted so desperately for this film to be, at the very least, Return of the Jedi-level good. Thankfully, it exceeded my expectations in just about every way possible. Like any good Star Wars film, it was fun to watch, it was suspenseful, and it got me choked up. A good Star Wars film is an emotional rollercoaster, and this one had plenty of highs and lows. Most importantly, Star Wars: The Force Awakens gets the franchise back on track after it was derailed by the prequels; Star Wars is fun again.

I want to start off by saying that I’m happy with the way Finn turned out, but his character went in the opposite direction I was expecting. Lucasfilms was pushing the idea that Finn would end up being a Jedi pretty hard. The third trailer showed him igniting a lightsaber, he had a lightsaber on the film’s poster, and just about every Finn toy I’ve seen came with a lightsaber. We can all be forgiven for believing he would end up being the next Jedi to lead this series. That turned out not to be case, but he was still a great character. Until now, stormtroopers have mostly been nameless, faceless, interchangeable characters (they always have been if you ignore the prequels). Now we get to see one not only unmasked, but defecting from his army. He’s both brave and resourceful, two qualities that make him fit in well with the characters from the original trilogy. John Boyega just looked so natural alongside Harrison Ford and Chewbacca. I think the franchise is in good hands as long as Boyega has a good blaster at his side.

I really liked Rey. Like Finn, most of the pre-release marketing revolved around her, so I had some pre-conceived thoughts about her before the film even started. Also like Finn, her character went in a completely opposite direction than I anticipated. While we never saw her wield a lightsaber in any of the trailers, she turned out to be the one who will be a Jedi. That’s perfectly fine by me. Rey is starting her story in a place similar to where we found Luke in 1977. She’s stuck on a desert planet doing work that she doesn’t really want to be doing. She’s heard the stories of the Jedi and the Rebellion and she dreams of one day fighting alongside them. She even sits outside after she eats her dinner and dons a Rebel pilot’s helmet. But she also has a little bit of Han in her. She can fly a ship and use a blaster, but she’s a reluctant warrior. When her Force sensitivities first manifested, she ran away. She came through in the end and one of the last shots we got of her was sitting in Han’s seat and flying the Millennium Falcon. That feels like a fitting place for her to be; she’s a little bit Jedi and a little bit scoundrel. Much like Luke when I was growing up, I’m sure she’ll end up being my favorite character as this new trilogy moves along. 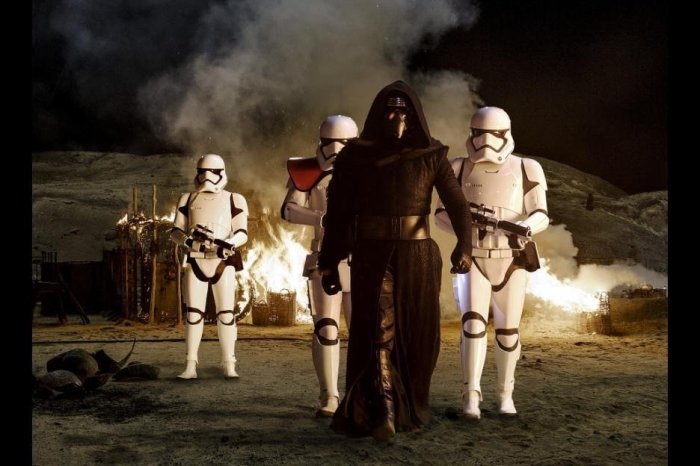 Next up for the new characters was Kylo Ren. Before the film was released, we knew that Ren had an obsession with Vader because we saw him talking to the charred helmet. I really loved the family dynamic that was written into the story. Ren isn’t just randomly obsessed with Darth Vader; he feels a connection to his grandfather and he wants to continue his depraved legacy. He admires him to the point that his style of dressing and voice are directly derivative of Vader. It was a risky move by JJ Abrams to create a villain so close in look and feel to such an iconic predecessor, but it paid off big time. Ren is interesting, and that’s more than I can say for any villain that appeared in the prequels except Palpatine. We saw enough of him to want more, but enough of the aspects of the character were left out to keep us guessing what his motivations are.

We did not get nearly enough screen time with Poe, but the little that we did get tells me that he will become an exciting character to watch. He’s the best pilot in the Resistance and he knows it. The cocky-but-capable attitude was played well by Oscar Issac. It was both a call-back to the Luke Skywalker and Han Solo of A New Hope while still managing to be an original character. I don’t know what his role will be for the next two films, but I hope it’s big because Issac is amazing and it would be a shame to waste such a promising character.

This is the character that I was most worried about going into this film. Andy Serkis is the best in the business at playing motion-capture characters, so no matter how he turned out, I knew the performance would be great, but the look of these types of characters can be so hit or miss. When he first appeared as a giant towering over Kylo Ren and General Hux, my heart sank. When it was revealed that he was appearing in hologram form, I felt a rush of relief that I never thought I would feel because of a scene in a film.

I’ll have to hold my final judgment until I see him in his real form live with other characters, but so far I think he looks and sounds great. He’s menacing in a way that makes him a worthy character descendent of Emperor Palpatine. He has a hold over Ren that Palpatine never seemed to have over Vader. While Vader paid lip service to the thought of destroying his son, Ren actually did kill his own father at the urging of Snoke. I don’t think it’s an accident that this made Ren a sympathetic character in my eyes; we’ve learned from Obi-Wan Kenobi and Yoda how much of a seductive force the Dark Side is. That force is being wielded by Snoke, and he has a full grip on Kylo Ren.

Han, along with Chewy, was the only original trilogy character that wasn’t relegated to a glorified cameo (this isn’t a complaint about how the characters were worked in; just an observation). After everything he’s done for the Rebellion and for this franchise, Han Solo finally got a Star Wars film that was mostly about him. He’s the only original trilogy character that got a mostly-complete explanation of his time between the fall of the Empire and now. His son is the main villain, and his possible failures as a father are given as the explanation for that. Han, the smuggler and scoundrel, died trying to do one last good thing for Leia, his son, and the Resistance. It’s exceedingly sad to see him go, but Han Solo got the best send-off he could possibly get. His actions made it possible for the Resistance to blow up the Starkiller Base, but he didn’t really die a hero; he died as a loving father and husband. He’s come a long way since A New Hope. He’s gone from thinking of the Jedi as “hokey religion” with “ancient weapons” to being the character that believes in the Force and sets Rey down her path. He’s also developed from the scoundrel that almost ran off on Luke and Leia when they needed him the most to the man that rushed right into danger when he saw that the Resistance was on the verge of defeat. Yes, Han Solo got the best ending we could possibly hope for. Rest in peace, you stuck up, half-witted, scruffy-looking Nerf herder.

We didn’t get much time with Leia, but the time we did get was satisfying. She’s the leader of the Resistance, which is not surprising. Leia was one of the strongest characters in the original trilogy, so seeing her leading the fight against the First Order is the right development for her character. I can’t wait to see where she goes next. Like Han, she loves her son and can still feel the good in him (this was one of at least two things that teased possible Force sensitivity for Leia). She also still obviously loved Han even though things didn’t work out between them. I’m excited to see how she reacts to his death. Will she still feel the good in her son? Will she harbor any resentment toward Luke for abandoning his family and friends? We’ll have to wait two years to find out, and that drives me crazy.

I don’t think anyone went into this film expecting Luke to get the small part he did. While he was the catalyst for the whole plot, he got only a couple minutes of screen time and no dialogue. That was fine with me. The look on his face when Rey presented him with his old lightsaber said it all. Luke is ready to return and redeem himself.

Poe Dameron, Rey, and Finn are all fitting successors to Han Solo, and it’s a testament to the performance of Harrison Ford that it will take three actors to make up for his loss.

We didn’t actually get to see much of the Knights of Ren, but you can bet they will be bad and awesome. We got a very small tease of them during Rey’s Force vision. We don’t know who they are or what their backstory is yet, so we’ll just have to wait until 2017 to find out.

When Rey was being led to Anakin’s lightsaber, I thought I could hear the screams of the younglings he killed in Revenge of the Sith. That suspicion was reinforced when I read that Ewan McGregor, along with Frank Oz, recorded new dialogue for this scene (the article I linked to gives a neat little explanation on how they actually used Ewan McGregor and Sir Alec Guinness’ voices). Next time you watch the film, pay attention to this part.

I loved the juxtaposition of Ren collecting Vader’s helmet and Rey collecting a Rebel helmet. These two were set up as the main antagonist and protagonist of the series, so seeing them honoring the past in such opposite ways was fascinating.

The original trilogy characters were put in a mostly supporting role, and I’m fine with that. I went into this expecting a handoff to the next generation and instead got a film led by that next generation with appearances from their predecessors. I have no complaints about how the older characters were handled. I’m sure they’ll get bigger parts in later films, but now was the time for Rey, Finn, and Ren to shine.

I love that Han and Leia named their son Ben. It was a great, but subtle, way to give a nod to Obi-Wan Kenobi.

BB-8 is a great character. It never ceases to amaze me the personality and emotion that can be conveyed with these droids (it’s less surprising with C-3PO since he speaks English). BB-8, and R2-D2 before, really are strong contenders for my favorite characters.