Skip to content
HomeFlash and Arrow Crossover Thoughts: “Legends of Today” and “Legends of Yesterday” 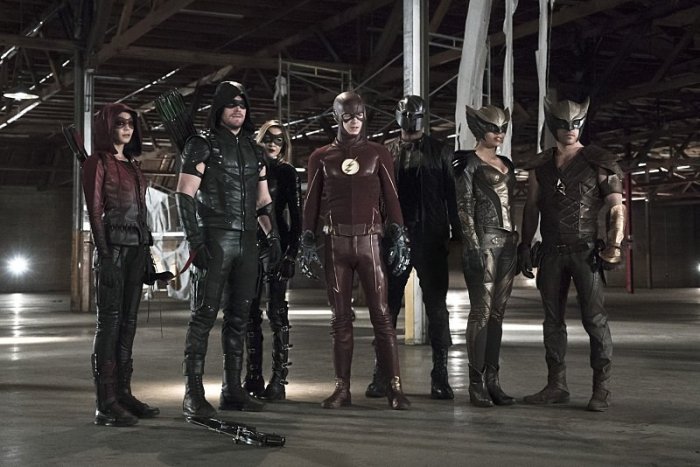 WARING: There are spoilers ahead for the latest episodes of Flash and Arrow.

I’ve been saying for weeks that I’m ready for Legends of Tomorrow to start so Arrow can get back to its story without endlessly teasing another show. This crossover was more of the same, but I actually like the way it was handled. The Arrow and Flash stories weren’t distracted by teasing Legends because Legends was the story. Rather than trying to squeeze in half-hearted attempts at focusing on characters that won’t matter to these two shows, we got two hours that nicely setup a backstory that is compelling. Now that this is out of the way, we can get back to focusing solely on Zoom and Damien Darhk while the Legends go off to battle Vandal Savage.

The last couple of seasons have gotten weirder for the Flash and Arrow universes. We’ve been introduced to mystical assassins and crime bosses, time travel, telepathic gorillas, shark-people, and lighting-fast heroes and villains. Now we can add 4,000-year old Egyptian bird people into that mix. And you know what? That’s ok. While I like a dark action-drama as much as the next person, I think comic book shows should be a little whimsical. It’s ok to throw in a little humor here and there, and there’s nothing wrong with having some characters whose concepts are just a little silly. To their credit, Falk Hentschel and Ciara Panabaker played Hawkman and Hawkgirl wonderfully. Hentschel came across as overly confident and slightly brutish in the way you would expect a 4,000-year old warrior to be while Panabaker confidently walked the line between regular coffee barista and emerging superhero. This crossover event gave me another thing to look forward to with Legends of Tomorrow

Despite the focus on our fowl friends and Vandal Savage, the writers still managed to work in a little Oliver drama. Oliver has a son and he chose to hide that from Felicity twice (too bad Barry couldn’t tell him the reason Felicity broke up with him in the old reality). We can be almost certain that Felicity will find out about this, and when she does, she will be at least as angry as she was the first time she found out. What does this mean for Oliver and Felicity? If you remember back to episode one of this season, Oliver will be standing over a grave six months from then. At first I thought it would be Diggle in the ground, but there’s a strong possibility that it will be Felicity. This is the perfect story arc to lead to her death. Her and Oliver will have a massive fight and break up only to later reconcile right before she dies. It will be a gut-wrenching blow to Oliver because he’ll know that he could have spent Felicity’s final days together and happy if he had just been open and honest with her. I know I just got done saying that comic book shows should be a little whimsical, but that doesn’t mean they can’t also be tragic.

I’m a sucker for tragedy and time-travel, so I like the scene where everyone died and then Barry came back in time to warn Oliver. Part of the reason this scene worked for me is because the time-jump that Barry experienced was talked about so briefly that I forgot about it until Oliver died. It gave me a nanosecond of genuine shock before I remembered what was happening. The fear and anxiety that we saw from Barry from then on heightened the tension enough to captivate me for the rest of the episode.