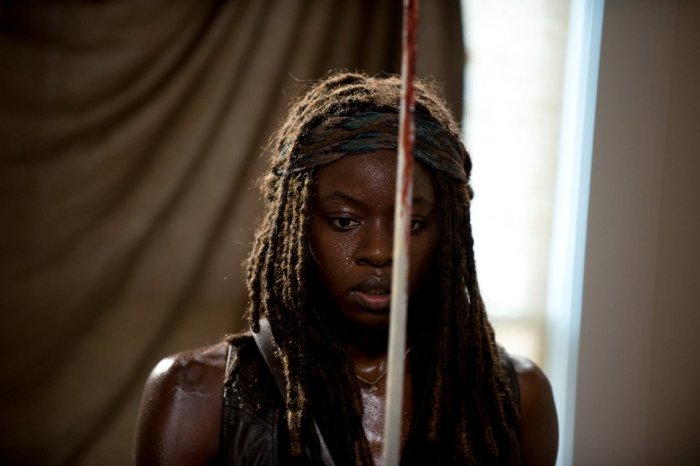 WARNING: There are spoilers ahead for the mid-season finale of The Walking Dead.

There was more character development in this episode than I was expecting, which is never a bad thing. One of the more interesting highlights of this episode was between Morgan and Carol. As we’ve seen this season, these two have issues with each other, and it came to a head tonight. Carol doesn’t trust Morgan, but Morgan doesn’t want to deal with that right now. That’s too bad, because Carol isn’t the wait-and-see type of person. Truthfully, Carol lost much of the good will she built up with me over the last couple of seasons. When she takes things into her own hands, innocent people die, sometimes by her hand. Tonight was no different. Walkers storming Alexandria be damned, she was going to end things with Morgan and this Wolf. Now Denise is probably going to die because of that, and others will probably needlessly die too since Denise was the closest thing Alexandria had to a medical doctor.

It’ll be interesting to see how this plays out for the two of them. If Denise really does die, then it’s a he-said-she-said scenario for Carol and Morgan. Rick knows her history, so he knows that she is capable of taking things into her own hands without considering the effects it can have on others. On the other hand, he knows that Morgan has this unreasonable mindset that all life is still precious. This will not end well for one them.

Distrust between people was a minor theme tonight, and it also came to a head between Carl and Ron. Last week I wrote about Carl losing an eye in the comic, and I really thought that would happen tonight. I don’t know if Ron actually has it out for Carl, or if he’s so consumed with grief over his dad and fear over the walkers that he’s just not thinking straight. Either way, he decided to take his anxiety out on Carl, and through the consequences, the whole group.

Where Does It Go From Here?

I’m hoping that the final conversation between Rick and Deanna signals the final union between Rick’s group and Deanna’s group. The division between these two groups wasn’t played out to the point of being annoying like I feared. Part of that is because the two groups haven’t actually worked that close together, but it’s also because it was spread out well over the first half of the season and it didn’t dominate any one episode. I think everything has played out rather organically this season, and the two groups will finally become one when Rick saves everyone’s asses in the mid-season premiere.

Are the Wolves now officially finished? If so, they didn’t factor in much this season. They were more of a filler until Negan and the Saviors show up. This was a rather anti-climactic end for them.

The final showdown between Morgan and Carol was tense. These two people have incredibly different philosophies about how to live in this world, and both are exceedingly capable of protecting themselves. This could have ended badly for Carol. Morgan is a character that will either die still believing in his principles, or he will eventually have to kill a living person; Carol could have been that person tonight (and she still could be if she continues her one-woman crusade against Morgan). Since both of them lived, we will get to enjoy more tension between these two polar opposites.

Here is all the information about the mid-season premiere.