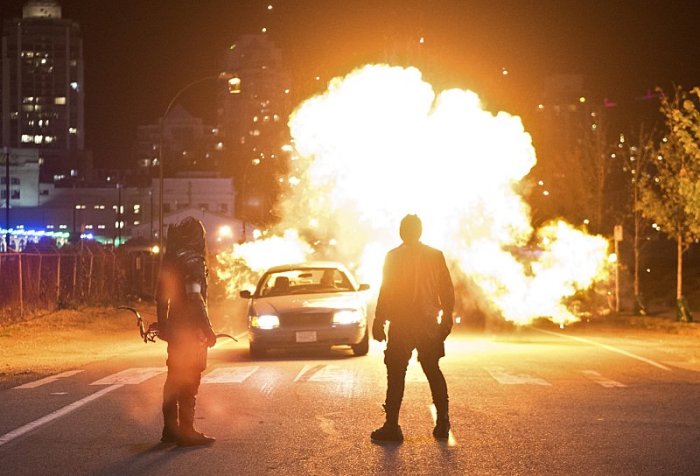 WARNING: There are spoilers ahead for the latest episode of Arrow.

We all knew this standoff between Oliver and Diggle wouldn’t last forever, and the writers resolved it in way that allowed for both expediency and believability. At the end of the day, these two love each like brothers. They would take a bullet for each other (or in Oliver’s case, a meta-human weaponized playing card). The death of Diggle’s brother has been looming over his head since season one. Now that Diggle trusts Oliver again, he can finally start to get the answers he’s been searching for in vain. Not only will this make the character of John Diggle interesting again, but it ends that mini-feud between these two that was, frankly, starting to get annoying.

Laurel, Thea, and the Lazarus Pit

I remember last season how underwhelmed I was when Thea came out of the Lazarus Pit. We were told that anyone that goes in there does not come out the same way. Thea changed for about ten minutes before she went back to being her old self again. Thankfully, that tease is starting to pay off. Thea now has a blood-lust that can only be cured by killing the already dead Ras al Ghul. Now she has to settle for occasionally satiating that urge by killing others. It poses an interesting dilemma for Thea. She’s not really a killer, but the powers of the pit are overwhelming her. She can say all she wants that she won’t give in, but we’ve already seen her kill this season.

Sara has also come out of the pit a different person, but unlike Thea, her transformation seems to be more overpowering. Is it possible that Thea’s time could be coming to an end? We know that the powers of the pit can only be overcome by killing the person who inflicted the mortal wounds on the person exiting the pit (assuming Malcolm was telling the truth, which he doesn’t have a great history of doing). We already saw Sara go after Thea once, so her instincts are telling her to avenge her own death.

There is another option. We know that the character of John Constantine is appearing in episode five, and we know that his appearance has something to do with Sara. It’s possible that in all his knowledge of the occult is the key to Sara’s, and Thea’s, full restoration.

I’ve said it before and I’ll repeat it now, Damien Darhk is the most interesting villain we’ve seen so far on Arrow. He is a powerful enemy. I liked that writers added in the HIVE sub-plot. Darhk answers to other people, but we saw the beginnings of power struggle between him and his unseen colleagues in HIVE. I love this because it gives us the opportunity to see just how dangerous he is without putting any of the main characters themselves in danger. Finally, it helps a great deal that Darhk is being played wonderfully by Neal McDonough. He is one of the most underrated character actors in Hollywood. Go back and watch the Band of Brothers miniseries, or Captain America: The First Avenger, or season four of Suits to see what I’m talking about. McDonough commands every scene he’s in, and he’s usually able to do it just with his words. It’s fitting that he’s playing a character with mystical powers in Arrow; words are his strength, and he’s playing to that strength right now.