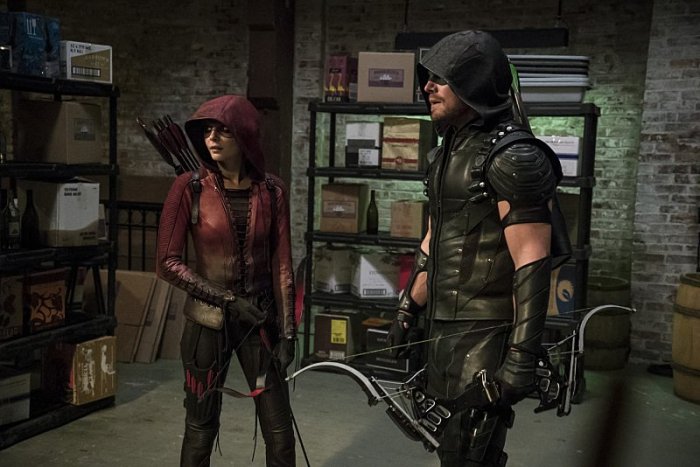 WARNING: There are spoilers for tonight’s episode of Arrow ahead. There’s also a spoiler about a dead character that will be returning. If you’ve watched previews for Legends of Tomorrow, you already know who it is.

Oliver continued his Star City Redemption Tour tonight. Jessica Danforth, an old family friend played by Jeri Ryan, decided she wants to run for mayor. Despite every other possible candidate dropping out of the race, and the city’s leadership being killed off by Damien Darhk, Danforth is convinced that she’s the woman for the job. The plot felt like it was only there to push along Oliver and Thea’s storyline. Oliver declared by the end of the episode that he would run for mayor. That’s already a development that’s coming way out of left field, so the writers needed a way for it to be logical to the story. Having the Green Arrow spending the episode protecting a family friend makes his decision almost make sense. The writers also needed to bring attention to Thea’s affects from the Lazarus Pit. That could have been done with any storyline, so doing it here made just as much sense as any other episode. Honestly, Thea’s story was the most interesting part of tonight, so kudos to the writers for picking this episode to start it off.

The big twist of the episode was Laurel digging up Sara’s body to take it to Nanda Parbat. If you’ve watched any of the previews for Legends of Tomorrow, you already know that Sara is coming back. We all probably assumed that it would be the work of the Lazarus Pit, so there’s nothing surprising there. The one thing that is a surprise to me is how soon this is happening. Legends is set to premiere in January 2016, so I thought Sara would probably come back closer to the winter finale. Having her come back now will set off a chains of events that I’ve been looking forward to. First, Sara’s resurrection, and Thea’s condition, is probably going to be the catalyst for the appearance of John Constantine. Even though that show got cancelled, the character was great, and I’m glad he’s finding new life on Arrow. This will also bring about the return of Nyssa, Malcolm Merlyn, and the League of Assassin’s. Many people had negative things to say about the second half of last season. While it had its faults, I thought it was a captivating story. I’m excited to find out what has come of the league now that Ras is dead and Malcolm has taken his place.

So we’re two episodes in and Ray Palmer is still presumed dead. Poor guy. We know he’s still alive (again, Legends spoiled that for us), we just don’t know what happened to him. My guess is that he shrunk down to an atom level and can’t get back. Hopefully the writers do more than just bring him back; I want to see parts of the story from his shrunken point-of-view.